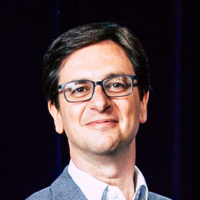 Abstract | Two thirds of the world's population will live in cities by 2050 according to United Nations. The economic and social progress of our urban areas, our institutions and our work depends on the diversity and resilience of the social fabric in cities. Despite their importance, several major forces erode the diversity and strength of those social connections: from income or racial segregation to differences in education and work access. In this talk I will present our recent work to understand the fragility of the network of social connections and labor markets in cities and their impact in experienced segregation or unemployment shocks.

Bio | I’m a researcher, data scientist and professor at Universidad Carlos III (UC3M) in Spain and Visiting Professor at MIT Media Lab and MIT Connection Science at IDSS. Previously, I was researcher at University of Oxford. A native from Salamanca (Spain) I hold a PhD in Physics and am an affiliate faculty at Joint Institute UC3M-Santander on Big Data at UC3M and the Joint Institute of Mathematical Sciences (Spain). I have published extensively throughout my career (more than 60 articles) and have led many projects funded by government agencies and/or private companies. Also served as jury in many Data Science and Big Data challenges, is editor of several journals and has advised many PhD students.

My work lies in the intersection of big data and computational social science, with special attention to human dynamics, collective intelligence, social networks and urban mobility in problems like viral marketing, natural disaster management, or economical segregation in cities. Apart from my academic career I have worked closely with companies like Twitter, Telefónica or BBVA in the use of massive datasets to understand problems like how humans communicate, how to political opinion spreads in social networks or building alternative wellbeing indexes. I have received numerous awards for my research, including the “Shared University Award” from IBM in 2007 for my research in modeling viral marketing in social networks and the “Excellence in Research” Awards in 2013 and 2015 from UC3M.