Collaboration in technological innovation is mostly local due to spatial constraints but working with distant partners usually pays off. We study the spatial dynamics of scientific and innovation-related collaboration to inform policy about opportunities and threats of innovative projects. 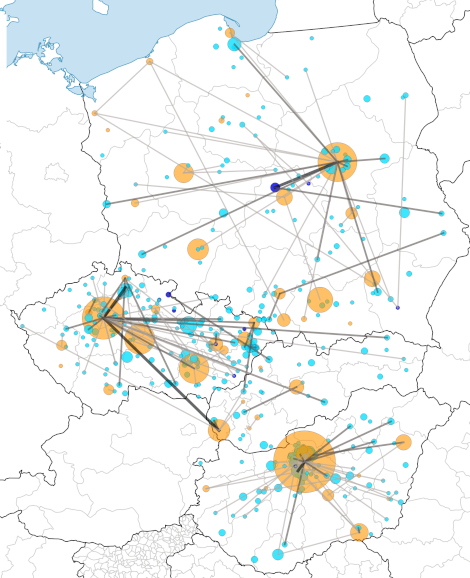 How did post-socialist transition and a parallel shift in international labor division restructure regional innovation systems in Central and Eastern Europe? This question is increasingly important, because current EU innovation policy is combined with regional development in Smart Specialization Strategies; however, spatial trends of innovation in Central and Eastern Europe are not fully understood which might lead to less than perfectly efficient policy. In this paper we describe the spatial dynamics of inventor activity in the Czech Republic, Hungary, Poland and Slovakia between 1981 and 2010 –a period that covers both the late socialist era and the post-socialist transition. Cleaning and analyzing the publicly available data from the United States Patent and Trademark Office we illustrate that Central and Eastern European patents made in international co-operations with partners outside the region receive more citations than those Central and Eastern European patents that lack international co-operation. Furthermore, the technological portfolio of the former patents has become increasingly independent from the technological portfolio of the latter class. A town-level analysis of the applicant-inventor ties reveals that inventors have started to work for foreign assignees in those towns where no innovation activity had been recorded before. However, the positive effect does not last long and patenting seems to be only periodic in the majority of these towns. Therefore, innovation policy in Central and Eastern European countries, as well as in other less developed regions, shall foster synergies between international and domestic collaborations in order to decrease regional disparities in patenting.

Mapping the efficiency of international scientific collaboration between cities worldwide