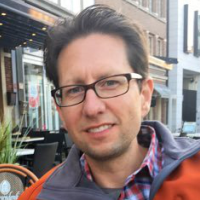 Abstract | Urban networks are challenging to measure, particularly at the global scale. In practice the world city network is often measured using the Interlocking World City Network Model (IWCNM; Taylor, 2001), in which cities are connected when they are home to many of the same advanced producer service firms. The IWCNM is a special case of a bipartite projection: cities are connected to firms in a bipartite network, which is then projected as a city network in which cities are connected by co-located firms. The analysis of bipartite projections is challenging because they are typically dense and clustered, and their edge weights can not necessarily be interpreted as indicators of strength. In such cases, it can be useful to instead analyze the backbone of a bipartite projection, which preserves only statistically significant edges. In this talk I introduce backbone models, and the associated backbone package for R, illustrating them in the context of studying the world city network.

Bio | Dr. Zachary Neal is an associate professor of Psychology and Global Urban Studies at Michigan State University in the United States. He is the author of four books and over 75 articles that have appeared in journals such as Urban Studies, Social Networks, and Psychological Methods. He also serves as an editor at two journals: City & Community, and Evidence & Policy. His current network research focuses on methods for identifying significant edges and extracting network backbones.