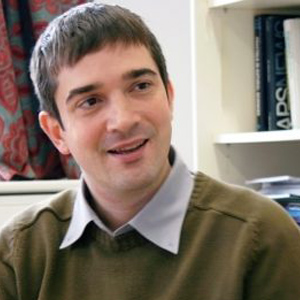 Hierarchical networks are prevalent in nature and society, corresponding to groups of actors - animals, humans or even robots - organised according to a pyramidal structure with decision makers at the top and followers at the bottom. While this phenomenon is seemingly universal, the underlying governing principles are poorly understood. Here we study the emergence of hierarchies in groups of people playing a simple dot guessing game in controlled experiments, lasting for about 40 rounds, conducted over the Internet. During the games, the players had the possibility to look at the answer of a limited number of other players of their choice. This act of asking for advice defines a directed connection between the involved players, and according to our analysis, the initial random configuration of the emerging networks became more structured over time, showing signs of hierarchy towards the end of the game. In addition, the achieved score of the players appeared to be correlated with their position in the hierarchy. These results indicate that under certain conditions imitation and limited knowledge about the performance of other actors is sufficient for the emergence of hierarchy in a social group.

Gergely Palla has received his PhD in 2002 at the Eötvös University. The topic of his thesis involved quantum chaos, semiclassical approximation and mesoscopic systems. From 2003 he worked in the research group at the Biological Physics Department (formerly the Biological Physics Research Group, at present the Statistical and Biological Physics Research Group). His main field of interest concerns complex networks, with a special focus on topological phase transitions, community finding (also called network clustering), the time evolution of communities and the studies of tagged networks. During his scientific carrier he received the following prizes: Young Scientist Prize of the Hungarian Academy of Sciences (2006), Bolyai Scholarship (2008), Imre Bródi Award (2009) and Junior Prima Award (2009).